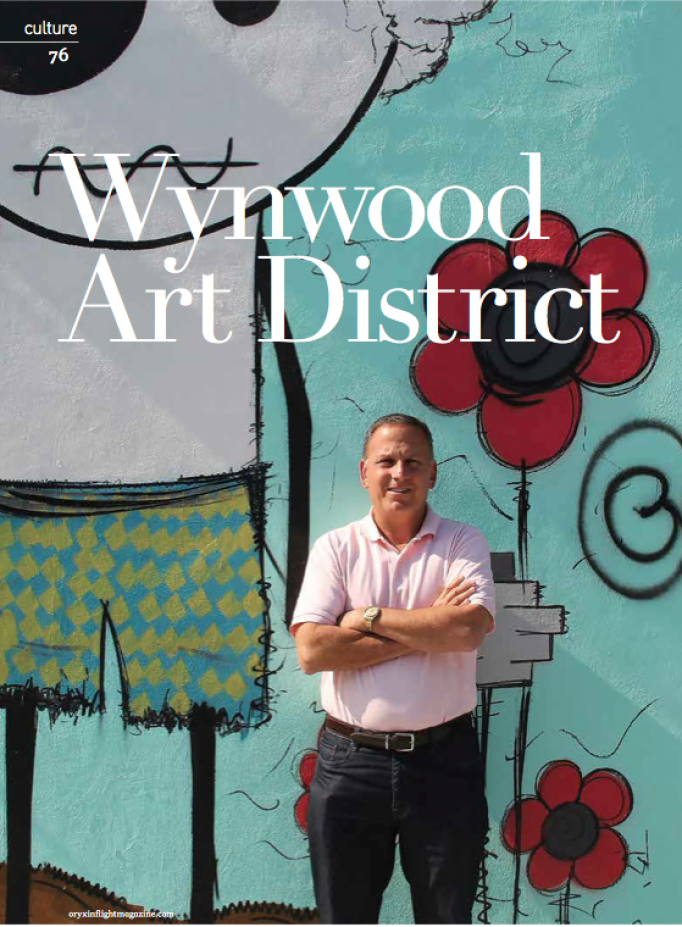 In just over 12 years David Lombardi has transformed a once crime-riddled, neglected neighbourhood in Miami into the city’s art district. Wynwood is now a bona fide, burgeoning arts hub with over 70 galleries, museums, and art collections, a ten-block stretch of restaurants and cafés, and a state-of-the-art fine art storage facility – the first of its kind in the USA. It also serves as an important venue for Art Basel, the nation’s pre-eminent art festival.

"The street was derelict; it was full of junked cars, mean dogs behind fences, and there was this gallery with absolutely no signage. Inside there were 70–80 young people all looking at art,” recalls Lombardi of the first time he visited the former fashion warehouse district across the way from South Beach.

He was in search of well-priced buildings to transform into lofts for some artist tenants he had on the Beach. In 2001 he created eight live/ work spaces for these artists in a former warehouse. Word got out, and soon young creatives were lining up for a piece of the limited inventory. “I had dozens of calls from kids who wanted to spend less for a live/work space. Prices were going up every year, and I didn’t want to see these young artists get forced out of their spaces, so I wanted to create a building where they could take an ownership stake,” Lombardi explains of the thought process behind the now- iconic Wynwood Lofts.

Now that he had the captive attention of Miami’s artists, the next step was attracting the ever- important art patrons and collectors to invest in the talent. Lombardi had the perfect solution – who doesn’t love a party in Miami? “I created these art parties for these kids, called ‘Roving Fridays’. In whatever space I had vacant at the time, we would invite 20 or so artists who didn’t have representation in galleries. I’d let them hang their work, and charge US$5–$10 at the door, all of which would go to these artists. I would pay for the DJs and a band, and there would be live painting demonstrations. These events would attract five to eight hundred people per week,” he recalls. At around the same time, Art Basel, the world’s most important art festival, was looking to develop a Miami Beach outpost. “We had a lot of our own hard work and a little bit of luck come together in December of ’04. It was the third edition of Art Basel, and Wynwood got discovered as this dirty little secret across the bay that housed two incredible art collections [the Rubell Family Collection and the Margulies Collection]. Art patrons from all over the world would all come over to see those collections, started to discover our neighbourhood, and that’s when I started to feel like we were onto something big,” Lombardi recalls.

Another key source of encouragement came through Tony Goldman, who was famously responsible for the development?of New York’s SoHo art district. “When I was in 10th or 11th grade, I would read about a guy named Tony Goldman, who started SoHo, and I always thought, ‘I’d love to do something like that.’The complete and utter validation for me was when Tony Goldman started buying buildings in Wynwood. We became allies and friends, and started the Wynwood Art District Association together,” says Lombardi of his ultimate art hero. As his legacy to the neighbourhood, Goldman curated the famed Wynwood Walls – a veritable life-sized art gallery of graffiti walls that is now one of the biggest draws to Wynwood.

As for his own legacy, Lombardi is quick to sing the praises of his beloved Museo Vault – the first and still one of the only state-of-the-art storage facilities for priceless art collections in the country. Museo Vault’s launch in the height of the recession was a sizable gamble for its developers. “Here we were with this 86,000-square-foot building n unproven entity in an art world that is known to be very pernickety.” But the famous expression ‘build it and they will come’ proved infinitely true for the warehouse, which happened to be built on the highest point in flood-prone Miami.

“We are at 90% occupancy and I have been called ‘a keeper of culture’. That’s a real compliment, because that is exactly what we’re doing?– we are preserving our culture for future generations.”

I have been collecting young Miami artists since the very beginning and have over 400 pieces. Two of my favourite artists areTypoe (represented by the Spinello Projects) and BooksIIII Bischof, who was one of my original artists from Roving Fridays. They’re the ones who started doing the murals that would later become the Wynwood Walls. They also have their own gallery called Primary Project. Also at Spinello there’s Aramis Gutierrez, an amazing painter. I have some great pieces from an artist called TMNK – the man nobody knows. He’s a very cool street artist. Naomi Fisher is also one of the earliest artists to come to Wynwood. Qatar Airways commences four-times a week flights from Doha to Miami on June 10.