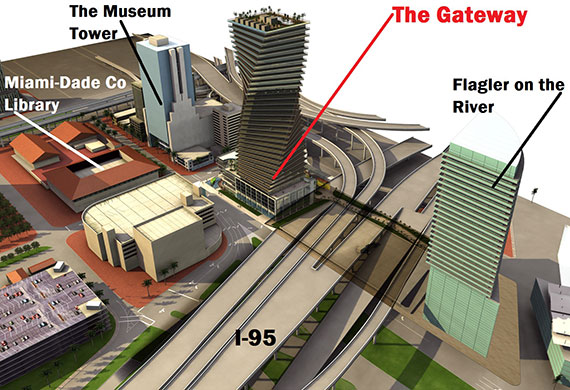 An assemblage of close to three-quarters of an acre on Flagler Street in downtown Miami has hit the market, and its owners expect it to sell between $15 and $32 million, The Real Deal has learned. The 32,200 square-foot property, at 200 West Flagler Street, includes mostly vacant land and parking lots, with small buildings that could be torn down, Scott Hannon, president of G&S Realty Advisors Corp., told TRD.
Hannon and his family own the land. His father, attorney Sam Hannon, purchased the first parcel more than four decades ago, and Scott Hannon said he has assembled the rest over the past 20 years. “It has been a lot of work putting it together,” Hannon said. “We believed in it for a long time.

Marketed as “the Gateway,”  because it “literally defines a gateway entrance into the city of Miami,” the property is zoned T6-36/UL can be developed into residential rental, office, hotel or retail use. Its allowable height currently is 36 stories, but that may be raised to 48 stories as part of Miami 21, Hannon said. Up to 315 residential units are allowed, or about 400,000 square feet of office space. The property has no stated listing price. But prices in the Flagler corridor have sold for $450 to $1,000 a square foot in the past couple of years, Hannon noted. “We are open to numbers in that range,” he told TRD. “We personally think the number would be on the higher end of that range because this is an extremely unique property.” The range translates to $15 million to $32.2 million, though Hannon also said he is willing to consider “all reasonable offers from prospective developers/investors.” Among the property’s attributes, he cited its visibility, location, access and proximity to mass transit.

Hannon said his family as well as adjacent property owners — including Moishe Mana, who has spent more than $200 million assembling a large portfolio in the Flagler Street district — are also open to a joint venture with a developer. Together with the other owners’ parcels, the property could total 54,600 square feet. “Moishe owns one of of the parcels on the block and he has expressed interest in purchasing the balance of the block, but he hasn’t presented any offers at this time,” Hannon said. The Flagler Street district is the midst of significant redevelopment. The county has funded part of a $13 million improvement plan for Flagler Street that will include expanded sidewalks, more trees, new benches and bicycle racks. The beautification project broke ground earlier this year. Other properties for sale in the district include the historic Walgreens building, currently home to La Epoca Department Store, which just hit the market. Habitat Development Corp., led by the Alonso family, owns the property at 200 East Flagler Street. Its TDRs, also known as air rights, are also for sale.