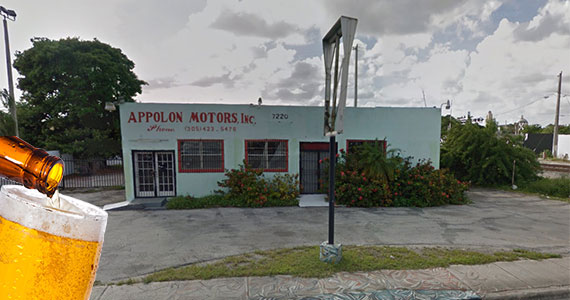 he Miami Planning and Zoning Board approved a variance that will allow the first full-service bar to open within a warehouse sector that’s being transformed into a trendy arts district, during a meeting Wednesday evening. Unless the vote is appealed by a nearby property owner, the planning board’s decision will enable Steve Livigni and Pablo Moix and their partners to open a craft cocktail lounge and bar called Apollo Motors within a former car repair shop at 7220 North Miami Avenue. Livigni and Moix have operated or started renowned restaurants and bars in Los Angeles such as the Chestnut Club, Black Market Liquor, Pour Vous, La Oescarga, Blue Cow Kitchen, and Plan Check, according to Apollo Motor’s application.

“We’re looking at something to attract people and bring this area back to life,” Wernick said. “It’s really a canvas and, in some ways, reminiscent of what Wynwood was five or 10 years ago.” Besides Wernick, three people spoke in favor of the project, including Neil Hall, a local architect who also serves on the Urban Development Review Board. “I questioned the veracity of the idea,” Hall admitted. However, he’s now convinced that a stylish bar could help revitalize the block and attract other creative businesses into the neighborhood. “This is a wonderful project,” he said.